IFRS 17 is fast approaching. Let’s be ready. As a background IFRS 17 is replacing IFRS 4 on insurance contracts. The project has lived for some 20 years already.

Find out what’s it all about and how it will impact the insurance business. The practise around the standard will still have to evolve once it is adopted. That phase is usually driven by the key players in the market and their auditors. IFRS 17 includes principles for the recognition, measurement, presentation and disclosure of

The insurance company shall:
– Identify insurance contracts as those under which the entity accepts significant insurance risk from other parties. Meaning compensating a policyholder if an uncertain future event
adversely affects the policyholder.
– Separate other, non-insurance, parts of the contract.
– Divide the contracts into groups for recognition.
– Measure the groups of contracts at a risk-adjusted present value of future cash flows i.e. the
fulfilment cash flow. Plus a contractual service margin representing profit.
– Recognise profit from an insurance contract over the period insurance cover is provided. If a
contract is expected to be loss-making the loss is recognised immediately.
– Present insurance revenue and insurance service expenses separately.
– Disclose quantitative and qualitative information about insurance contracts and the nature
and extent from those contracts.

The core model is called the core or general model (GM) and is similar to the so called Variable Fee Approach (VFA). 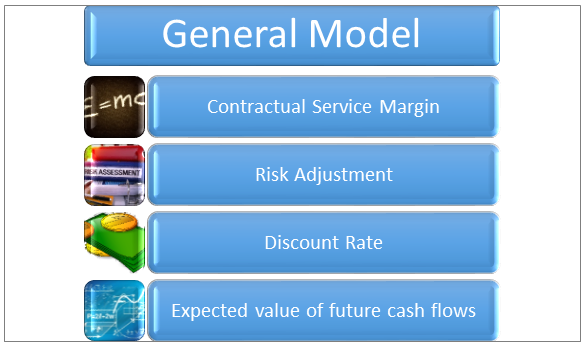 The simplified model is called the Premium Allocation Approach (PAA). Under IFRS 17 an insurance contract is defined as

The definition remain essentially the same, the news is that the time value of money has to be considered when assessing whether amounts payable are significant.

Another difference is that IFRS 4 allowed companies to use previous accounting policies whereas IFRS 17 has to be applied to all insurance contracts. This may affect contracts previously classified under IAS 39 or IFRS 9.

Under IFRS 17 a reinsurance contract is defined as

Investment contracts with discretionary participation features is defined as

“A financial instrument that provides a particular investor with the contractual right to receive, as a supplement to an amount not subject to the discretion of the issuer, additional amounts:

These contracts falls under IFRS 17 if the issuer also issues insurance contracts.

Among the exclusions of the IFRS 17 the following can be found:

For contracts with fixed-fee services, for instance roadside assistance, IFRS 17 offers a possibility to instead applying IFRS 15. The distinction may be done on a contract by contract level.

Components of the insurance contracts

IFRS 17 requires a company to identify and separate components in the contracts. After separation these may need to be accounted for under other IFRS guidelines. If the insurance contract includes embedded derivatives the company should apply IFRS 9. See image below. Generally IFRS 4 permits voluntary separation of non-insurance components in insurance contracts (unbundling, right image) even though when it is not required.

Under IFRS 17 the regulation is applied to all components that are not required to be separated. The level of aggregation deals with grouping contracts for the purpose of recognising losses. First portfolios of insurance contracts should be identified. A portfolio includes contracts with similar risks. After that each portfolio is divided into subgroups:

The assessment is made on initial recognition and not reassessed. An entity is generally not allowed to have contracts issued more than one year a part in the same group. This is different from the current approach and is likely to limit the possibility to offset profits and losses between years or cohorts. 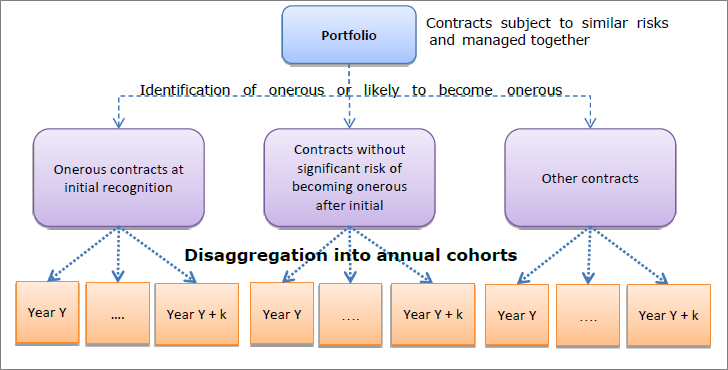 Contracts are assumed to have similar risks if they expects cash flow to respond similarly to changes in key assumptions. Contracts within a product line would be expected to belong to the same group.

It seems like a specific insurance contracts shouldn’t be split between risk groups but this remains to be clarified.

An initial recognition should be made regarding which contracts are expected to be profitable or not. Each group of risks should be assessed individually, see picture above. This can either be assessed by deciding which group they belong to for a set of contracts (top- down) or on a per contract basis (bottom-up).

The assessment should include the likelihood of changes in assumptions which if they occurred would result to making contracts loss-making.

A complication for the reader of the financial statement is that an insurance company may for instance issue loss-making contracts under the assumption that it is likely to be renewed and if so, in total be profitable.

Another one is prohibited grouping of contracts issued more than one year apart. This may reduce visibility of profitability over time and result in profits not being recognised in the correct periods. Initial recognition should be done at the earliest of:

An insurance contract may, at initial recognition, join an existing group of contracts.

The core approach is referred to as the general model. In addition to that one there is modifications and simplifications applicable in certain circumstances. 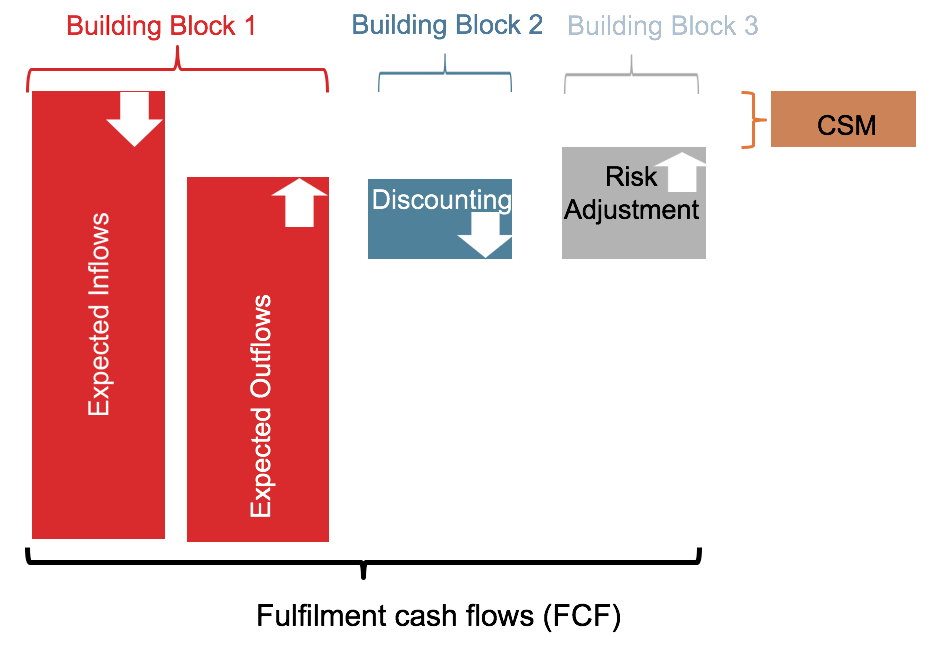 The general model is a sum of the following building blocks:

For reporting both should be valued at the valuation date. After the initial recognition this is the sum of the

where both of them have a risk adjustment and discounting applied.

Modifications to the general model applies to

Simplifications to the general model is allowed in some circumstances. This is called the Premium Allocation Approach and does not measure the CSM explicitly.

These should include all cash flows within the contract boundary. Take into account all available information about the amount, timing, uncertainty etc. The concept of contract boundaries is similar to Solvency II.

Cash flows normally include, for instance:

Some cash flows that should not be included are:

IFRS 17 does not come with prescribed discount rates as is the case in Solvency II. As always there will be complications for very long contracts (20-30 years) depending on the market. 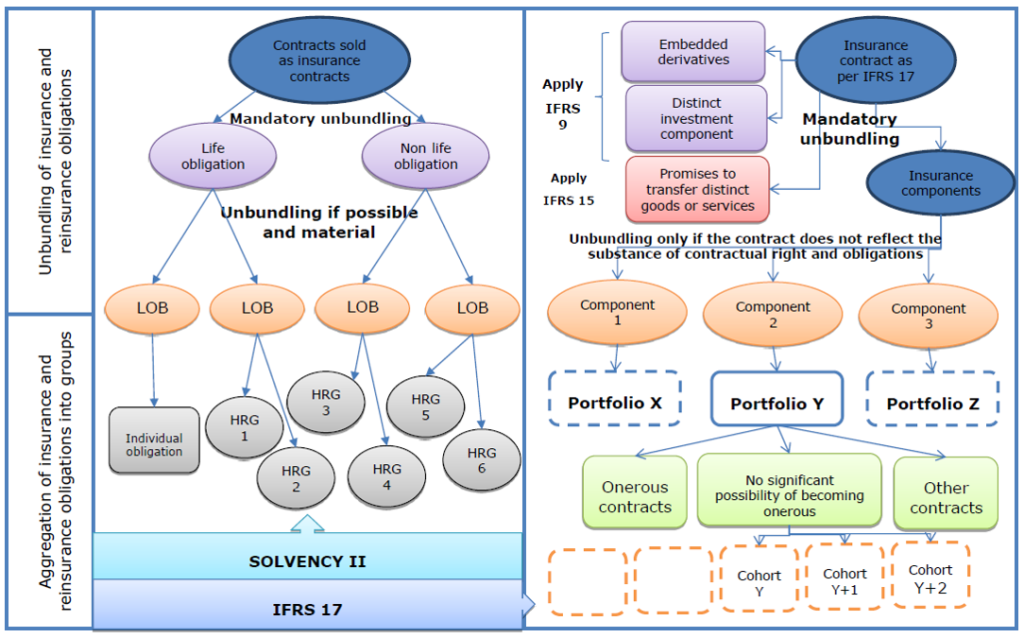 The risk adjustment is aimed to reflect the uncertainty in the cash flows. Both the amounts and the timings. This includes for instance insurance risk, lapse risk and expense risk.

This represents the unearned profit. This feature is unique to insurance contracts and IFRS 17. 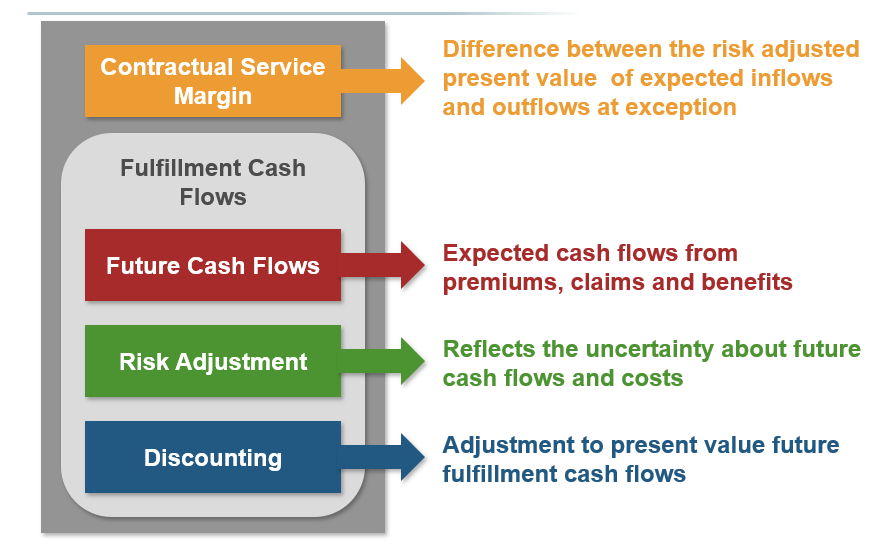 This method is a simplification of the general model.

The accounting model for this method is similar to the accounting under IFRS 4 and sometimes referred to as an earned premium approach. However there is no separate recognition of deferred acquisition costs and no separate premium receivable line.

As in the general model there is special treatment for onerous contracts. The premium allocation approach is allowed if and only if one of these conditions are met:

Please find an illustration below where,

Link to the IFRS organisation and the IFRS 17 standard